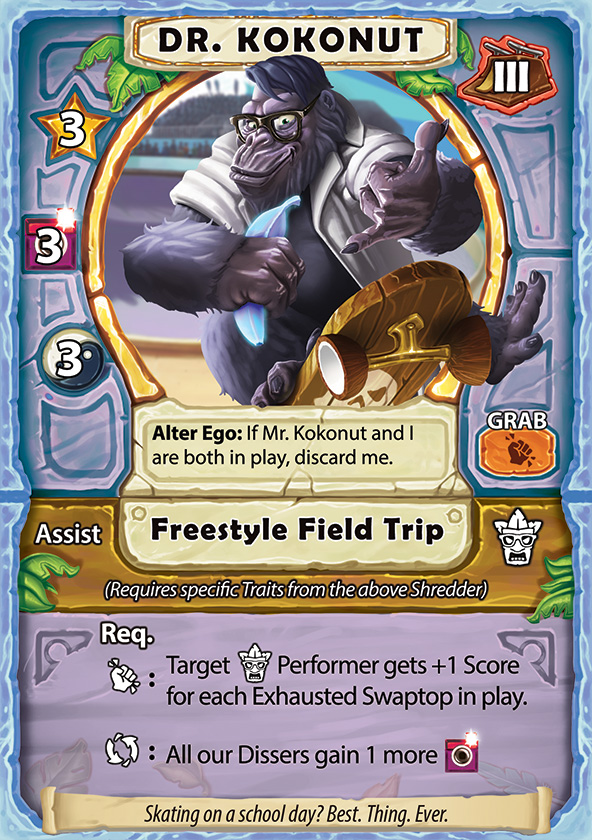 When he was small, he dreamed of becoming a Shaka Shredder, just like his mother Plantana and grandfather Lokotan.

It was love at first sight really. His first experience in the stadium was as a young child, up in the stands with family friends as they all energetically cheered for his mother and grandfather, the two best Skaters on the Geeky Freakies skate team. He awed at the miraculous, gravity defying feats performed by every athlete, as well as the sounds of the cheering fans, the sweet smell of roasted pineapple, the flash of color from team flags flapping in the sea breeze. And though it would be several years before young Kokonut would physically step foot inside the actual Shaka Shredder arena, in his mind he was already an MVP.

His mother recognized his gifted mind from a young age, and knew that he had the potential to become scientist capable of improving life for all islanders, but she also observed how much he loved skateboarding. She too, loved skating, but that all changed one grim afternoon, during the semifinals of one fateful tournament. It began like any other Assisted Trick she and her father had performed a thousand times, although this was certainly the most ambitious in their repertoire. They called it “The Banana Boat”, and it was one of the most technically difficult Tricks ever performed in Shaka Shredders history. First, Lokotan built up speed on the half pipe before launching into the infinity-loop, where he hit supersonic velocity. Plantana carefully timed her approach, holding a screwdriver in each of her hands while dropping down the ramp. She raced towards the infinity-loop, tossed the screwdrivers into the air, transitioned into a handstand, and then caught them with her feet so the screwdrivers pointed up towards the sky. The crowd oohed and awed. Lokotan saw her approach and exited the infinity-loop, careening just above his daughter as she, with lightning speed, unscrewed both wheel trucks from his skateboard, essentially converting his famed “Banana Board” into a surfboard. Only this time, she missed one screw. The margin of error on this Trick was low, but the highly gymnastic Lokotan could always abort the Trick when he sensed something was wrong, and land safely into the pools of water in the arena. Only this time, he didn’t seem to notice the mistake by Plantana. It had been a grueling morning, as he traded point for point with his arch-rival, Ballad the ice dragon, and Lokotan wasn’t focused enough on his own safety, but rather on besting his rival.

As Lokotan approached his target destination, a wave barrel Ballad was already surfing, Lokotan thought of nothing else than showing up his rival at his own favored sport, surfing. With the momentum Lokotan had picked up in the skateboarder’s infinity-loop, he could outpace even Ballad on the water, the fastest surfer in Shaka Shredder’s history. It was a beautiful trick, the first of its kind - a transition Trick from skateboard to surfboard, from land to sea. Plantana saw the disaster coming, and screamed out for Lokotan to abort, but he was too focused on Ballad to hear her cries. The loose truck, attached by one missed screw, caught the edge of a skate ramp that was standing between Lokotan and the wave.

Plantana saw this coming an instant before it happened and fired off the rockets on her famed, jet-engine skateboard in an attempt to save her father, but it was ill advised as she herself knew it was too late. Lokotan went careening off his board at high speed and smashed into the arena wall, his daughter just a second behind him also crashed into the wall. The crowed gasped and pointed at the large crater left by the impact. Plantana, gravely injured herself, held her battered, unconscious, and barely breathing father in her arms. Tragically, he would die right there in her arms moments before doctors could arrive. An investigative team discovered that the unscrewed skateboard truck was ice cold upon examination. When they looked closely, they noticed the single missed screwhead on the truck was covered in ice, which had prevented Plantana from successfully unscrewing it. Conspiracies flew and a lifelong ban was placed on Ballad the ice dragon, who insisted he had nothing to do with it. Despite charges never being pressed by Plantana, Ballad was forced to leave the island as public perception of him had villainized him beyond any possible redemption. Upon his departure, he is rumored to have admitted to the crime, although he insisted that he never imagined anything as tragic as what had occurred, and that he merely wanted the Trick to fail, not to kill or even injure his rival Lokotan.

There is still talk of the incident today, with conspirators discussing how such a malicious stunt could have been pulled off. The event permanently changed Plantana, both mentally and physically, and she gave up skateboarding forever, became a doctor, and founded the premiere hospital on the island. It was from then on that she forced Kokonut deeply into this studies, and forbade him from becoming a skateboarder.

Ever defiant, young Kokonut would often climb the tallest tree and peer through primitive binoculars he invented from juice pop bottles to watch Shaka Shredders train in the distant stadium while he was supposed to be studying.

It was Koko’s desire to observe the athletes from outside the stadium that would actually fan the flames of his love for science, not his mother’s pushing. First it was fashioning those makeshift binoculars, then, when that no longer was enough, he invented hovercraft to take him high in the sky for a bird’s eye view. That led to him inventing an airborne coconut shell camera that projected back live feed from the game, thus becoming the early prototype of Shredder Island Satellite television. Kokonut quickly became famous in his own right, as the youngest inventor on the island, with the highest island I.Q. to boot. He was encouraged by other intellectuals like his mother to abandon his obsession with sports, and put his massive intelligence to better use by focusing on science and design instead. And while he did enjoy science, his first love remained Shredder sports. Using the feed from the coconut camera to practice his skateboarding skills, he trained himself to become a superb skateboarder, building his own makeshift “trick park” in the backyard of his house.

By the time he was eighteen, Koko earned a PhD in Engineering and Quantum Physics. It was then “Dr.” Kokonut began conducting Shaka Stone research related to fruit. He perfected many recipes and formulas to make life better for all those who live on Shakana Island. With the revenue earned from patents he created, he founded Tiki Tech University, and the university Shaka Shredder team, The Tiki Tech Lasers.

Though initially a college-level team, The Tiki Tech Lasers performed so well in their division, they were allowed to play in the pro league. The team is comprised entirely Tiki Tech University students and staff, all of which were physical misfits at the beginning, but have all grown (under Koko’s mentorship and coaching) into tremendous athletes in their own right. Dr. Kokonut’s most famous invention is a special Shaka Coconut Oil, extracted from Shaka-Nut Trees he bred. The Shaka-Nut Oil can be used as a powerful source of eco-friendly energy to power machines and computers.

Dr. Kokonut's top secret ongoing personal project is a time machine. He is secretly building it for surprisingly personal reasons--he wants to go back in time to repair his friendship with Shredzilla. The machine, like most powerful machines, runs on the Shaka-Nut Oil as an energy source. It is his noble life’s mission to inspire, educate and train the next generation of scientists and Shaka Shredders! 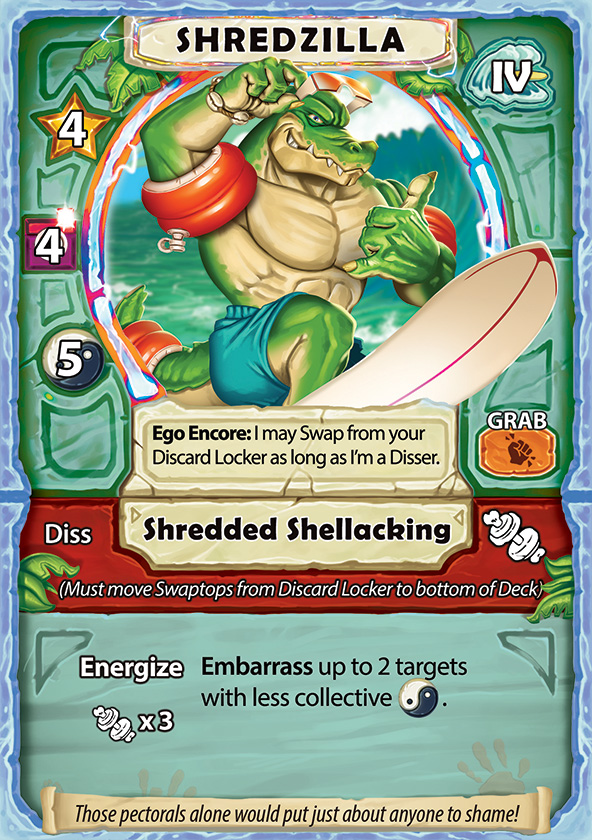 Water was to be feared. This was a lesson young Shred learned on the darkest day of his life.

THE BIG SKIPPER was one of the most famous Bros that ever surfed a wave. The way he rode the water gave rise to whispered rumors that one day became factual lore, such as he could hold his breath indefinitely underwater, and that he carved his first wave as a diaper-wearing tadpole.

Shred looked up to his father Skip with the doe-eyed reverence reserved for only for young boys adoring their fathers. To Shred, his father Skip was more than just a Shaka Shredder superstar. He was a living, breathing SUPERHERO, missing only the ability to take flight and shoot lasers from his eyes.

And so was the heights of his adoration matched by the depths of his horror when his father, performing during a dangerous open sea exhibition event promoting the coming Shaka Shredder season, was unceremoniously swallowed by a sea monster. As the crowd gasped and screamed, Shred stared with shocked, unblinking eyes at the ring of sea foam marking the spot where Skip was pulled down into the depths and out of his young life.

Filling the void left by his father was fear, fear of the water that gave cover to father swallowing monstrosities. It seemed to him to be a crude joke played by fate, he, the son and heir to his father's surfing dynasty, was too afraid to step a single toe even into two-inch shore water. When his mother tried to help him conquer his fear with the help of water wings, he nearly hyperventilated and drowned from panic.

He also learned fans can be fickle, and redirected their adulations for his father to other rising superstars. The show must go on, it seemed. Soon after that, the invisible shield of protection his father once provided via his prestige eroded, and Shred was left vulnerable to cruel taunts and bullying of secretly jealous peers.

This only intensified when his only friend, a young ape named Koko, convinced him to go out in a boat with him to conquer his paralyzing fear. It didn’t go well, and Koko had to save Shred’s life and drag him to shore. Kids on shore laughed at him, and Shred swore his revenge on them all that day.

Fast forward to present day, and through intense training Shred reinvented himself as Shredzilla, a surfing beast filled with anger and hate for any that oppose him. His sole goal is to reclaim is father’s legacy and the respect he felt was stolen from him.

And though he surfs seemingly fearlessly in water, woe to the poor soul that asks him why he still wears waterwings. 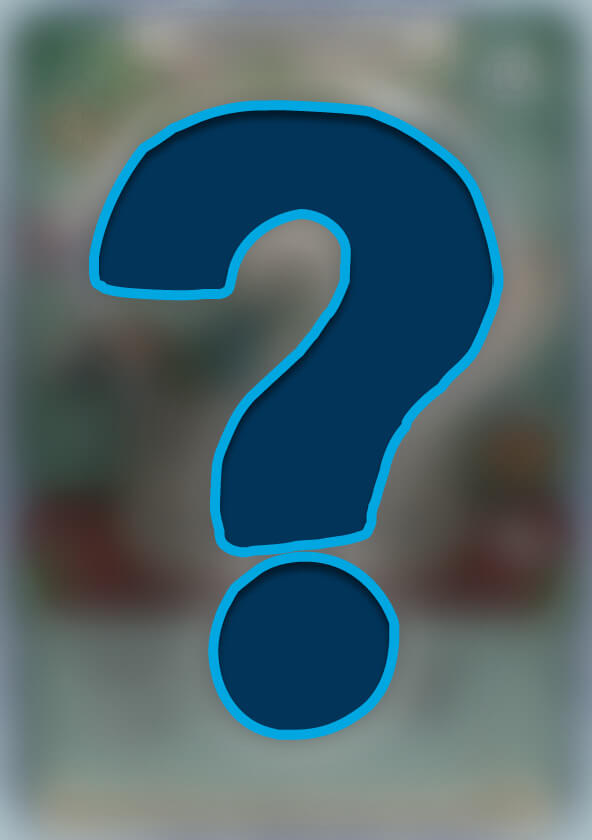 Not much is known about this menacing masked Pirate.

He just showed up one day on shores of Shakana with no boat in sight, as if having risen phantom-like from the depths of the murky sea itself. After quite forcefully taking command of the Party Pirates, he quickly focused his mind on two things - gaining possession of the Shaka Shredder championship trophy - and defeating the reigning Shaka Shredder champ, Shredzilla.

It is rumored though that not only is the face behind the mask monstrously scarred, but that Ripper’s true identity and intentions have yet to be revealed…